When it comes to Kanye West, it is best to expect the unexpected. Unless you’ve been living off the grid, you’ve probably heard of his pop up shop, and if you haven’t heard, well now you know. If you missed your chance of grabbing a Life of Pablo tee on his tour, now is your second shot. You can grab a bunch of Kanye merchandise in 21 cities all over the world, from New York to Berlin all weekend long.

According to Nylon, the NYC pop up shop was about five racks in a tiny room, and had a black/white/gold color scheme (each city gets its own unique one). This excludes the camo Pablo military jacket though. Prices range from $45 -$325 with the military jacket being the most expensive piece. Short sleeve tees were $55, long sleeves at $75, crew neck sweatshirts at $95, and hoodies for $105. They also offered $45 embroidered New York hats for those who didn’t want to splurge. 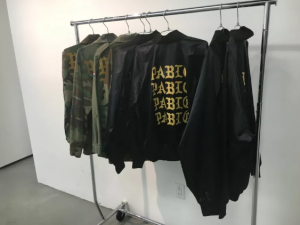