When Sony and Marvel casted Zendaya as the female lead in Spider-Man: Homecoming, we had some serious questions. Would she play the hero’s love interest, Mary Jane Watson (made famous by Kirsten Dunst)? Would she play a character we are entirely unfamiliar with? Why do we not know yet?

When some of the footage was screened at Comic Con, fans noted that it seemed she was playing a new character entirely. Despite that, we have discovered that she will in fact play Mary Jane. This was revealed by both the Wrap and Vulture, with Vulture claiming that the character reveal doesn’t actually happen until the end of the film when she asks Peter Parker (played by Tom Holland) to call her “MJ.”

We’re excited that Marvel is bringing back the Mary Jane character, as she was replaced by Emma Stone’s Gwen Stacy in the last two Spider-Man films, but what is even more exciting is that a woman of color is playing the character. The cast for the upcoming film includes names like Hannibal Burress, Laura Harrier, and Donald Glover but Zendaya playing the traditionally red headed Mary Jane shows Marvel’s progressive attitude towards bending the rules. 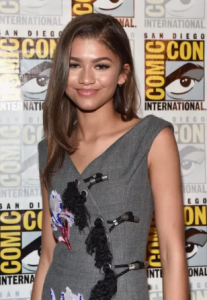