It has been three years since young New Zealand singer Lorde released her breakout album Heroine and rose to stardom. She dominated the charts for quite a while, but we haven’t heard much from her since her track on The Hunger Games soundtrack.

If you didn’t know that Lorde tolerates no sass, then get ready for this:  An impatient fan lashed out on Instagram, asking when she would be releasing a new album. To their surprise, Lorde actually replied to the brash comment and shut them up quick. Screenshot of Lorde shutting up restless fan and reminding us to never mess with her below: 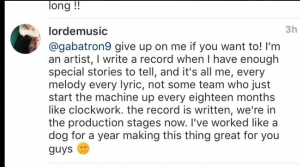 Details regarding her upcoming LP are not clear, but she has definitely been hinting at collaborators. She recently posted a picture with Flume with the caption “Harley’s Angels.” Two months ago, she posted about her progress working with Jack Antonoff.

Word to the wise: leave Lorde alone. Stop pushing her buttons. Artists will release albums when they’re ready. We know she has been working on her new album, and we also know what happens when artists are rushed through the creative process. We will update you when there are solid details on the upcoming Lorde LP! 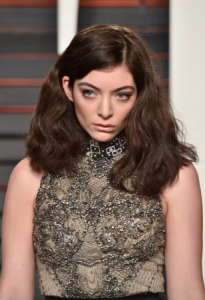