A few hours before the Video Music Awards kicked off, MTV confirmed that Beyoncé would be taking to the stage with a performance. Before the awards show, she walked the red carpet with an important group of women: Sybrina Fulton, Gwen Carr, Lesley McSpadden, and Wanda Johnson, who are the mothers of Trayvon Martin, Eric Garner, Mike Brown, and Oscar Grant, respectively.

The singer has shown her support for this cause by participating in rallies to end police brutality and the bullying of minorities. She has also used her platform as a famous singer to speak up about these issues. Her visual album Lemonade is politically charged and touches upon more than just cheating in a relationship. The visual album featured footage of the four mothers holding pictures of their sons that were gone too soon.

Earlier this year, Lesley McSpadden spoke to Sirius XM and said, “I felt special. She had also did some things for my son’s foundation, so at that point, I said, ‘Whatever you want me to do, I’ll do it.’ I appreciate her for being bold enough to confront things and being sensitive at the same time.” 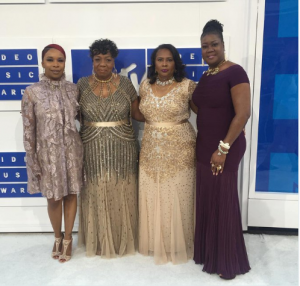