Drake is known for wearing his heart on his sleeve, and being vulnerable about relationships and emotions so when we saw him onstage as a surprise guest at the MTV 2016 Video Music Awards to present Rihanna with the Video Vanguard award, we knew something was about to go down.

“She’s someone I’ve been in love with since I was 22 years old,” Drake confessed. “She’s one of my best friends in the world. All my adult life, I’ve looked up to her even though she’s younger than me.” It was a milestone for both the two of them, and fans who have been willing the two together. Drake finally confesses his love for Rihanna on the biggest stage, with the whole world watching, so what could go wrong, right? They have no choice but to kiss, right? Wrong.

Drake goes in for the kiss, and Rihanna totally blows it off. “That wasn’t funny,” she can be seen mouthing afterward. Maybe she’s not into PDA, or maybe she’s just not into Drake. You can watch it happen here if you missed the most awkward moment of the decade. 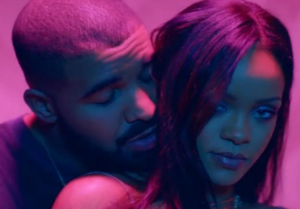