Chris Brown had an encounter with LAPD  after he allegedly threatened a woman with a gun inside his home on Tuesday. Reports claim the victim showed up with some of his friends but was not invited and then he threatened her with a gun in an argument. After a lengthy standoff, Brown was arrested for assault with a deadly weapon according to Los Angeles Police Department.

The situation escalated to a standoff between Brown and the police, then the officers checking out his property under search warrant. In a press conference with LAPD Lieutenant Chris Ramirez said he had no knowledge of Brown failing to cooperate with police, despite other reports. “Investigators still have to interview the victim and any potential witnesses in this incident that may have occurred at Mr. Brown’s house. At this time, that is all the information we have,” Ramirez said.

Ray J is also involved, though tangentially, as he was at Brown’s home at the time and reportedly had his BMW taken by the police as evidence.

Brown posted a series of videos in which he reacted angrily about the police and media presence. According to reports, he also threw a duffel bag outside his home which LAPD took in as well. The bag contained at least one gun as well as other weapons and some drugs. He is currently being interviewed by the department’s Robbery-Homicide Division. “He will be booked, and he will be given the opportunity to bail out at the end,” said spokesperson Tony Im. 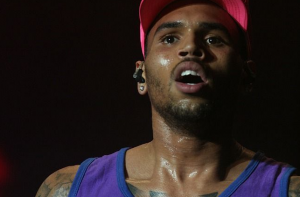