Despite Rihanna definitely dodging his kiss as he presented her with her Michael Jackson Vanguard Video award, Drake and the love of his life since he was 22 were spotted out on a dinner date at Nobu.

“They walked in together and never left each other’s side all night,” an inside source told ET. “He was so attentive to her. His eyes were never off her. They were necking a lot. They would hug and he would kiss into her neck.” Rumor has it she even slept at Drake’s hotel after, and wore a shirt dress the day after. Could the shirt possibly be Drake’s from the night before?

It’s one thing to keep someone’s shirt, but to wear it in public like a statement piece is another. We definitely think there’s something brewing between the two of them, but we won’t know for sure unless RiRi makes it official, so until then, we wait. 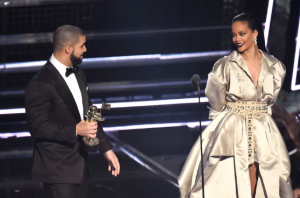