AIM is the supposed last album for M.I.A. and is one week away from its release. To generate some hype around the release, she dropped what is likely the record’s most anticipated track “Freedun” featuring Zayn Malik. She stopped by Annie Mac‘s BBC radio show to debut the song, and shared she just returned from filming the music video in the Himalayas.

“Freedun” is one of the more radio friendly songs on the album, and the rapper was happy to speak a little bit about it. “I made this song a long time ago, and it was too mainstream sounding for me,” M.I.A. told Mac. “If I was going to have a collaboration and have someone like Zayn, this was the perfect song. It sort of takes me out of my comfort zone, and it kind of takes him out of his a little bit as well.”

Last month, M.I.A. told Entertainment Weekly that the collaboration came after she decided to pursue writing songs for other artists, Zayn included. She shared that the two never shared a studio and did all their collaborating via WhatsApp. You can check out the track here. 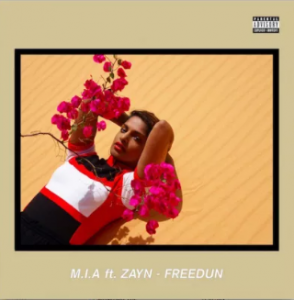