It’s hard to identify what the best part of Drake’s newest video “Child’s Play” is but I am willing to put money on the part where he sings the entire verse in a Cheesecake Factory booth with cheesecake still on his face. It could also be that the video was actually filmed in a Cheesecake Factory, Drake’s fav chain. We thought Rihanna might even show up with Tyra Banks playing his ex, but you’ll have to see the video for yourself.

The premise of it is this: Drake breaks up with his girlfriend and decides to hit up a strip club. Then Tyra shows up and calls out her cheating boyfriend. Then there’s essentially a cheesecake fight. We’ve got questions about this video: How much cheesecake was harmed in the making of this video? Was there free cheesecake involved? Did Drake eat all the free cheesecake after? How many takes / cheesecakes did this take? You can watch the video here. 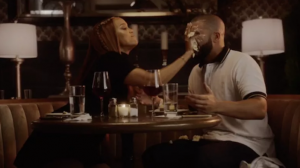