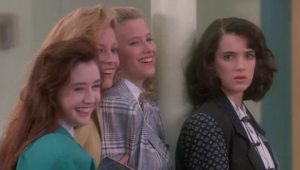 Back in March, we mentioned that Heathers would be one of the films getting a television reboot this year and according to the Hollywood Reporter, TV-Land has officially okay-ed the pilot.

The good news is that the reboot may only resemble the original in name alone. The concept of ‘Heathers’ as mean girls who run the school is going to be completely flipped, with all the misfits being named Heather. The reboot’s Heathers will be: Heather McNamara, a black lesbian, and Heather Duke, a male who identifies as genderqueer, will be running things.

If the show is a success, each season will feature a new set of outcasts. Think American Horror Story but in a school setting.

“I related with it so much,” director Leslye Headland said of her relationship with the original. “I can’t believe they got away with so much. The movie was a huge influence on an entire generation and it’ll be nice to introduce this to a new generation.”

The show is expected to begin production in the fall.