Earlier today, time stopped for a brief second as TMZ dropped the jaw-dropping news that Angelina Jolie has filed for a divorce from Brad Pitt. There aren’t many details surrounding the split, but she cited irreconcilable differences. TMZ is reporting that Pitt’s parenting of the couple’s six children was at the heart of the matter. They are also citing Pitt’s use of marijuana, alcohol, and an anger problem also led to the end of their romance.

With a large brood, the divorce is bound to be messy. Jolie has asked a judge that Pitt only have visitation rights rather than joint physical custody. Though they’ve only been married two years, the couple has been together for over a decade with Pitt leaving his then-wife Jennifer Anniston for Jolie on the set of their 2003 movie, Mr. and Mrs. Smith.

Pitt is scheduled to start promoting his new movie, Allied, but there’s uncertainty regarding how this will affect the film’s publicity tour. 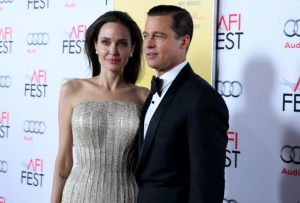