Chance the Rapper just achieved a major milestone by getting his own emoji on Twitter in celebration of his upcoming festival based in Chicago, Magnificent Coloring Day Festival. He worked with Twitter to create the custom image that features his iconic number 3 hat to tribute to the event, which took place this past weekend.

If you couldn’t make it, don’t sweat it! The emoji is live until October 1st and can be activated on Twitter using a few different hashtags, including #MCD, #MagnificentColoringDay, #ColoringBook #ChancetheRapper, and more.

Joining him at his mini festival were Lil Wayne, Young Thug, 2 Chainz, Francis and the Lights, John Legend, Alicia Keys, Skrillex, and more with the event selling out. He also streamed the whole event on Tidal for those who couldn’t make it. The one day event was just part of his tour that launched on September 15th and he will be touring across the country until October 21st where he is set to play San Francisco. Then he’ll embark on a Europe tour. Catch Chance on the road, and happy tweeting! 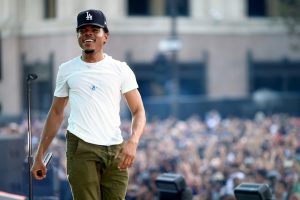