We think of our top 5 rappers, Tupac Shakaur is always on the list. This great musician got his credit and recognition that he was due this past weekend. Tupac was inducted into the 2017 Rock and Roll Hall of Fame. The event was held at the Barclays Center in Brooklyn,NY. Tupac’s friend and label mate Snoop Dogg were there at the event in his honor. There were other artists in this induction ceremony. Tupac’s good friend Treach from Naughty by Nature performed his the hit “Hail Mary”. Grammy award winner Alicia Keys performed three songs “Ambitionz Az a Ridah,” “I Ain’t Mad at Cha,” and “Dear Mama.” Snoop and YG gave their rendition of “Gangsta Party”.  To top it off in full Tupac gear T.I graced the stage and performed “Keep Ya Head Up’. The ceremony was taped and will be aired on HBO April 29. This is an accolade well deserved. Tupac has made an impact on music in general and his legacy lives on. 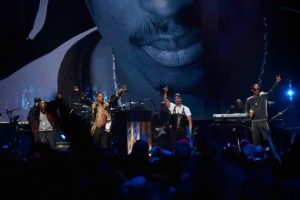