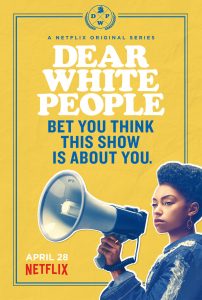 “Dear White People” was a comedic movie released in 2014. The movie addresses racial tensions in a fictitious Ivy League between the white students and African American students. The movie was a hit and will debut in Netflix as 10 episode television series. Some of the cast of the movie will be returning to the show. The series will pick up where the movie left off. Who will be tuning in? Check out the trailer: